LONDON (Reuters) – British luxury brand Burberry (BRBY.L) has agreed to license its fragrances and cosmetics business to Coty (COTY.N) for $162 million, plus a $63 million payment for inventory, in a deal that will help it develop new products and give it the benefit of the U.S. group’s extensive distribution network.

The logo of Burberry outlet store is seen in Paris, France, March 10, 2016. REUTERS/Charles Platiau
Best known for its British-made trenchcoats, Burberry’s beauty range is led by fragrances My Burberry and Mr Burberry, and includes cosmetics to help introduce its brand to new consumers.

The company, which took the perfume business back in house in 2013, said it would retain creative control while Coty, which counts Gucci, Hugo Boss and Calvin Klein in its portfolio, would bring its global distribution network to the table.

Chief Financial Officer Julie Brown said Burberry had repositioned the business by cutting secondary-channel sales, and it was now time to team up to develop it further.

“Coty has very broad experience of working closely with other luxury brands,” she said in an interview. “We will benefit from their deep beauty industry expertise and also their first-class distribution.”

Coty will pay 130 million pounds ($163 million) for the long-term license, plus about 50 million pounds for inventory and other assets, Burberry said. It will also pay royalties from October.

Beauty contributed 7 percent of Burberry’s revenue in the first half of its 2016/17 financial year, down 17 percent on the prior period, partly as a result of the repositioning. 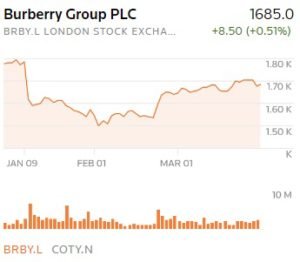 It launched men’s fragrance Mr Burberry a year ago and young British model Iris Law has promoted its cosmetics.

Chief Operating Officer John Smith said there was an opportunity to increase cosmetics sales, which currently account for about 8 percent of beauty sales against an industry average of a third.

“Make-up is a key recruitment tool for a luxury brand, in that the price points are a lot lower than any other product,” he said. “As a means of recruiting people into the brand, it’s perfect.”

Analysts at Exane BNP Paribas said they welcomed the decision to find a partner to develop the beauty business.

“In fact, we never liked the idea of Burberry managing its beauty business directly, as beauty is an FMCG (fast moving consumer goods) business where you win on the back of global reach,” they said.

Burberry said the deal would be broadly neutral to adjusted profit before tax in 2017/18 and accretive the following year.

Written by Paul Sandle for Reuters